The USS Montana Committee was publicly announced on May 12, 2017, to a statewide meeting of Montana submarine veterans.

Attendees at the Kalispell meeting of the Montana Base of the U.S. Submarine Veterans, 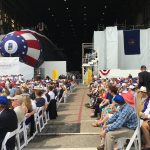 Inc., were shown a first photo of the status of what will be the Treasure State’s new namesake warship. Officially the PCU MONTANA SSN 794 since she is a pre-commissioning unit until christened in advance of joining the Navy fleet in 2020, MONTANA is behind the secrecy shrouding on the right. The photo was taken during the April 29 christening of another Virginia Class nuclear submarine, the USS Indiana (on the left), at Huntington Ingalls Newport News Shipbuilding in Virginia. The shrouding was necessary to guard against disclosing components of America’s most modern submarines, and how they are put together.

Those seeing and hearing about the USS Montana Committee ranged from one veteran who was on nine diesel boat patrols in World War II to those who served on modern nuclear attack and ballistic missile subs.

During the meeting, the Montana Base voted to make a contribution toward the work of the USS Montana Committee.

The news release in connection with the presentation to the veterans is available here: USSMTC – Establishment News Release for 5-12-17 (5-10-17) .

Members of the USS Montana Committee’s steering group are available to make update presentations at statewide and local community organization meetings. Just use the on the Contact page to make a presentation request, ask a question or provide a suggestion. 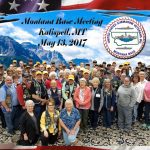 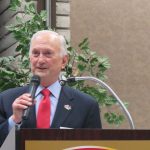 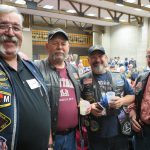 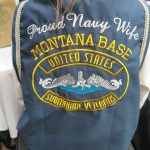 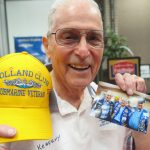 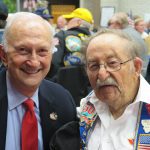