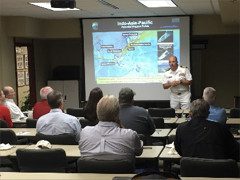 The Chief of Staff for the Commander of the U.S. Navy’s Pacific Submarine Force, Captain Gene Doyle, spoke on July 13, 2017, in Kalispell to a group of USS Montana Committee leaders and members, as well as members of the public.

He was in town explaining international military challenges and USS Montana roles.

Gene is a native of Kalispell and attended Montana State University.

Gene explained a number of international military challenges facing the United States and the U.S. Navy, especially from China, North Korea and Russia. He then focused on the role of the U.S. submarine fleet in meeting the challenges. Of special interest to attendees was the capabilities and missions of the new Virginia Class nuclear fast attack submarines such as the USS MONTANA will have in the future.

A copy of Captain Doyle’s presentation may be viewed here.