A flag that was flown over Montana’s Capitol in honor of the future USS Montana (SSN 794) and her crews was shown to veterans attending a recent Kalispell (MT) Rotary Club meeting. The flag showing was part of a presentation by the USS Montana Committee. 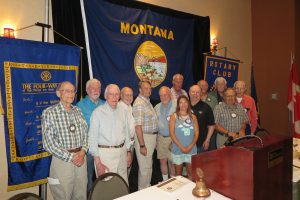 The presentation, as do others around the state, included a video featuring Newport News (VA) Shipbuilding employees talking about their work on Virginia Class subs like Montana. The flag also honors the shipbuilders who are constructing Montana and will eventually be presented to Newport News Shipbuilding to be displayed on the construction site. It will later be given to the Montana for use at crew and family events, reminding all who see the flag of the support they have in Big Sky Country.

The USS Montana Committee is the commissioning committee for the boat that will bear the state’s name. Its mission is Supporting the commissioning of SSN 794 and all those who sail aboard her in defense of our nation.

The Committee is made up of members from across Montana. It was announced at a May meeting of the Montana Base of U.S. Submarine Veterans, Inc. The Committee has since received recognition and endorsements from the Governor and State Legislature of Montana.

The Committee is actively informing Montanans about the future USS Montana, including its capabilities and missions. It is also explaining the work of the Committee and how Montanans can become involved.