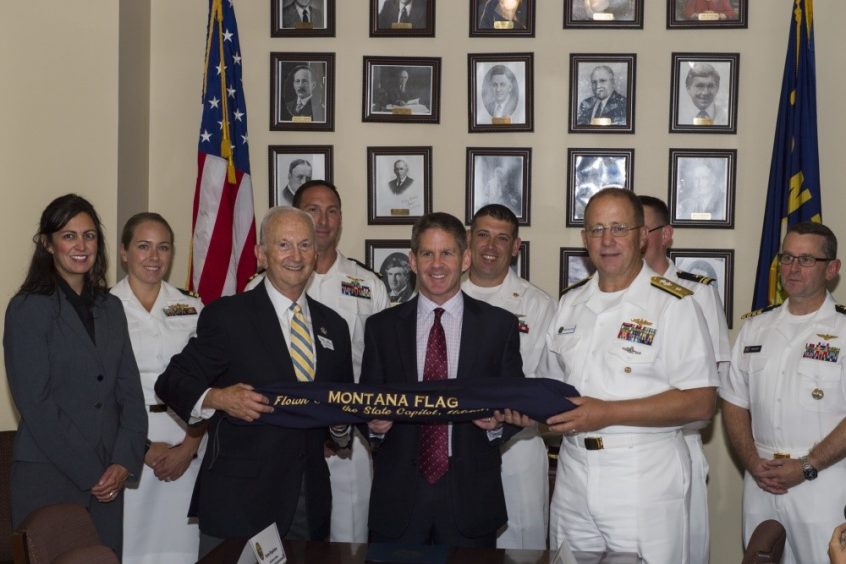 The future USS Montana, a Virginia Class nuclear fast attack submarine under construction in Newport News, Virginia, will fly a Montana flag that has flown over the State Capitol in Helena.

Montana Secretary of State Corey Stapleton presented the flag on August 15 jointly to Bill Whitsitt, Chairman of the USS Montana Committee, and Rear Admiral Mike Holland, Maritime Headquarters Director for the U.S. Pacific Fleet, during a Montana Navy Week event in Helena. Admiral Holland, of Great Falls, an MSU graduate, and a submariner, was the Navy’s senior representative at a number of events marking Montana Navy Week.

The flag will eventually be presented by the USS Montana Committee to the commanding officer of the USS Montana before her commissioning as a member of the U.S. Navy fleet in 2020. It is certain to remind all who see it anywhere in the world of the support the warship has in Big Sky Country.

A second, larger flag that has also flown over the Capitol, will be installed at the USS Montana construction site. Once the state’s namesake warship is commissioned, the larger flag will be presented to the boat’s crew for display during port calls and for crew events.