So far, of the expected 130-or-so core crew members, a half dozen of the early selectees are from, or have connections to, Montana! We’ll have more on these individuals in the future, as well as the names of the senior officer and enlisted leaders. This information is expected to be announced in March.

We understand that, among the MONTANA crew members who have been named, the boat’s Engineer Officer is from the Treasure State.

The prospective Commanding Officer, Engineer, and thirty other members of the engineering team that will be responsible for the safe operation of the MONTANA’s nuclear power plant, are currently attending what is known as “Design School.” Held in Schenectady, New York, the school ensures that there is a deep understanding of both the operation of the power plant and the reasons behind its design and operation.

Additional crew members will be selected at a rate of perhaps 8-to-10 each month over the next year. We’ll have periodic crew updates.

A preliminary emblem for the future USS MONTANA has been developed and we are proud and pleased to share it here. 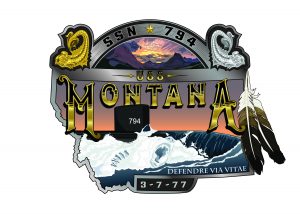 As you see, it is designed to capture the essence of our state and the Montanans who will always support the men and women who will sail aboard the USS MONTANA in defense of our nation, our values, and our way of life.

In addition to the beautiful Montana scene at the top of the emblem, note the gold and silver dolphins that are the symbols of the submarine force and that are earned by every submariner, gold by officers and silver by enlisted sailors. The dolphins also reflect our state motto: Oro y Plata (Gold and Silver).

Note also the symbols of power and vigilance in the emblem. Included is the strong and ferocious grizzly bear in MONTANA’s bow wave. Our state’s Native American heritage – and the fact that our native brothers and sisters have one of the highest military participation rates – are reflected in the eagle feathers that Indian warriors have carried into battle in defense of their homeland and families. And there is the 3-7-77 calling card of those in the Montana Territory who warned road agents and others that bad actions would be met with severe consequences — just as MONTANA and her sister warships signal to those who would threaten our freedom and values.

We are very proud of the work that has been done on the USS MONTANA emblem, and look forward to seeing the final version.