Start of construction of the future USS MONTANA was officially marked in a ceremony at Newport News Shipbuilding in Virginia on May 16, 2018.

With a backdrop of a section of MONTANA’s hull, the ceremony included the traditional welding of the initials (in this case, SRJ) of ship sponsor Sally Jewell onto a steel plate that will be affixed to the submarine. It concluded with her declaration of “…the keel of this United States Navy Submarine, Montana, truly and fairly laid.” 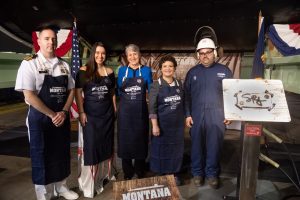 The ceremony also had other very moving Montana touches. Principal among them was a Native Blackfeet blessing of the boat and its crew by Mariah Gladstone of Kalispell. Mariah was chosen by Ms. Jewell to be the MONTANA’s Maid of Honor. (We’ll post more on Ms. Gladstone and her role in the future.)

The welder of the SRJ initials was Jacob McNulty of Newport News Shipbuilding – who was born in Great Falls.

Following the ceremony during a media availability period, the state song, MONTANA, played continuously in the construction bay.

The ceremony was framed by our American and Montana flags. The latter was a gift to the future USS MONTANA by the USS Montana Committee. It had flown over the State Capitol in Helena and had been displayed at presentations to veterans and community groups around Montana before being seen in Newport News.

A short video of ceremony highlights may be viewed here.

A local Newport News article about the ceremony, which provides additional insights and reactions, may be found here. 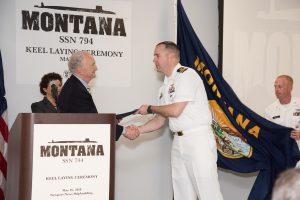 Signed by Secretary of State Corey Stapleton, the certificate reads in part:

All Montanans are proud that this flag will be with the dedicated shipbuilders who are creating one of the world’s finest ships, USS MONTANA, and that it will later be available to remind her crew and all those who may be part of her keel laying, christening,  commissioning or other events, and future port calls, that the people of Montana support this ship and crew as they defend our nation and our state.

The luncheon featured a number of Montana-themed dishes, including broiled trout, bison burgers, and huckleberry pie.

The day provided a superb marking of this important occasion in the life of the future USS MONTANA!