In the 2018 Montana Voter Information Pamphlet distributed statewide, Secretary of State Corey Stapleton reminds voters that casting their ballots is “…one of your most important rights and fundamental responsibilities.” 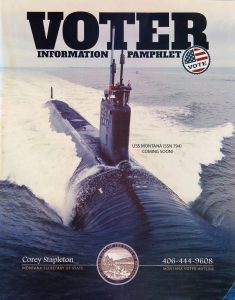 The pamphlet has a cover photo of a Virginia Class nuclear-powered attack submarine like the future USS MONTANA that is now under construction.

Inside, Secretary Stapleton’s letter to voters further reminds that “…valiant men and women…have risked and given their lives so that we might become an even better nation.” He then discusses the future USS MONTANA whose crews will defend our nation for decades once it is commissioned into the Navy fleet.

The Secretary, a Navy veteran himself, concludes by saying, “While we exercise our right to disagree, to argue, to vote, may we always remember that there are many American soldiers and sailors who are keeping guard and protecting these freedoms. Freedom isn’t free – and it never was, it never will be. So vote like your state and nation depend on it”