It was a fun event with a number of firsts when PCU MONTANA Commanding Officer Michael Delaney, Chief of the Boat Mel Walker, and sailors were part of a Capitol Hill briefing earlier this month. 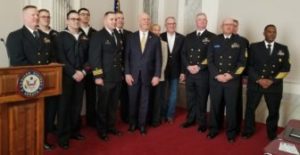 There were first opportunities for Congressional Delegation members and Montana’s Attorney General to visit with some of the future USS MONTANA’s leaders and crew – and vice-versa. There were also first looks at new update information on the under-construction MONTANA and the work of the USS Montana Committee. There were first visits to Washington by some of the crew – and for all of them a special tour of the Capitol arranged by a crew member who had previously worked on the U.S. Capitol medical staff! 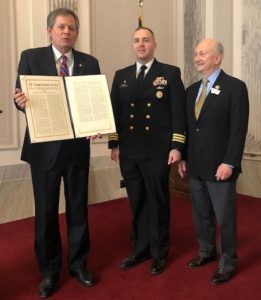 to CDR Delaney and the USS Montana Committee. Also featured was a briefing and question-and-answer session by the USSMTC and CDR Delaney on the future USS MONTANA’s capabilities, construction and crew status. Two sailors were introduced as the first to receive special awards:  Machinists Mate Nuclear First Class Burnett, MONTANA Sailor of the Year,  and Electricians Mate Nuclear Second Class Fellows, MONTANA Junior Sailor of the Year.

Senator Daines and Representative Greg Gianforte, his wife Susan, and Montana Attorney General Tim Fox all were able to meet and visit with the MONTANA crew members, as were the numerous other guests.

Included among those attending was Rear Admiral Mike Holland, a Montana native, MSU graduate, and submariner currently serving as Director of Programs in the office of the Chief of Naval Operations. 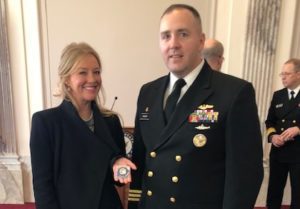 Others at the Capitol Hill briefing event included Montanans now working and/or living in the Washington area and who are members of the host Montana State Society.

Among update points made during the program were that MONTANA is more than 60% complete and more than ninety crew members are in place, with additional sailors arriving weekly.