As the USS Montana Committee works toward fulfilling its mission in support of the commissioning and crew of a new Virginia Class nuclear attack submarine (currently the under-construction pre-commissioning unit, or PCU, SSN 794) that will carry our state’s name, its members have a keen awareness of the legacy our namesake warship’s service will build upon.

That legacy is tied to the original USS Montana. It was an armored cruiser (AC 13) that served with distinction before and beyond the First World War. We’ll provide more detail on its service and accomplishments, including those related to the pre-WWI occupation of Vera Cruz, Mexico. But already there is fascinating information about the original USS Montana in the “First USS Montana” section of this website 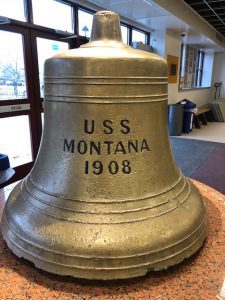 1908 USS Montana Bell on display in the lobby of the University of Montana’s Adams Center.

The story of the ship’s bell didn’t end when the Montana was decommissioned. In fact, only a new chapter began. Here it is told in an article by Rex Boller of Lakeside, MT, one of those who knows the bell’s history first-hand:

In 1931 the Sigma Chi fraternity in Missoula, moved into 1110 Gerald Ave. and needed a bell to announce dinner. Sigma Chi alum and former UM President Fredrick Scheuch wrote a letter to his friend General Patrick Hurley, Secretary of War under President Hebert Hoover, requesting a dinner bell from the former ship. The one-and-a half ton bell arrived in lieu of the dinner bell.

In summer of 1955 the Bell mysteriously disappeared from the Sigma Chi backyard. Then, in early 1978 the Bell was discovered at a rival fraternity in Bozeman. It was painted an ugly shade of purple and was hit with a sledge hammer when a Bobcat touchdown was scored. The Bell then returned to Sigma Chi in Missoula. During Christmas Eve in 1978 the rival fraternity stole the Bell again and stored it in a saddle room on a ranch in Charlo. There it stayed for 16 years until moved to a barn in Wyoming for further safe-keeping

The Bell has been the center of one of the greatest rivalries in Montana collegiate history. Finally, after much negotiations and maneuvering between the two fraternities along with alumni and actives and officials of the two colleges, the Bell was returned just in time for the Homecoming in 1998.

The Bell has been safely displayed in the lobby of the Adams Center at the University of Montana in Missoula since 2000. It is on an oak pedestal topped with a marble slab etched with the fraternity motto “in Hoc Signo Vinces” (which means “In this sign you shall conquer”).

And know that the USS Montana Committee is investigating the possibility of a submarine-sized recast of the 1908 version to be the ship’s bell of the new USS Montana as she defends our freedom and values around the world over future decades.