Construction and crew selection have reached significant new levels for the future USS MONTANA – with the latest official completion number at 71 percent as of September 13. In addition, 93 percent of the first crew had been selected.

A key first shipyard event earlier in the year led to the need for 24/7 watch-standing on the PCU (for pre-commissioning unit) MONTANA’s propulsion plant that will continue for the expected 30-year life of the boat according to the commanding officer, CDR Mike Delaney. And now the life-of-ship nuclear reactor core has been installed.

The MONTANA is the next Virginia Class nuclear-powered fast attack submarine expected to undergo sea trials from Newport News Shipbuilding in Virginia. Before that happens, two subs being constructed by General Dynamics Electric Boat in Connecticut are scheduled.

Christening of the MONTANA is currently targeted for spring of next year, 2020. Following successful sea trials, commissioning into the Navy Fleet is possible around mid-2021. 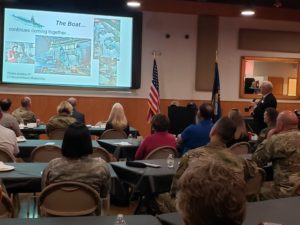 Those were some of the significant updates provided to the Great Falls Area Chamber of Commerce’s Military Affairs Committee (MAC) by USS Montana Committee Chairman Bill Whitsitt.

The Chamber MAC is made up of both business members of the Chamber and military leaders and personnel from Great Falls’ significant active duty military community that includes Malmstrom Air Force Base with its 341st Strategic Missile Wing, and Montana Air National Guard units.

Commanding Officer Delaney and crew members of MONTANA visited Malmstrom during the summer to learn about its Minuteman missile- based strategic deterrent role.

As construction of the future USS MONTANA proceeds, the current 128 crew members are busy training, and obtaining new qualifications and ranks. Recently two additional sailors were “pinned” as Chief Petty Officers, making three to have achieved that rank while onboard Montana.